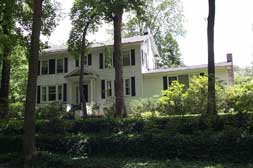 The neighborhood of Overbrook began with the expansion of the Greenville trolley line. The trolley line was extended in 1910 to its new terminus on the outskirts of the city, an area that became known as Overbrook. In 1913, a group of businessmen responded to the expansion of the city by recognizing a need for middle class housing which could be supported by the trolley line expansion. These businessmen, called the Overbrook Land Company, were organized by the Woodside brothers of Greenville. The Woodsides gained fortune from the Woodside Cotton Mill which was at one point the largest textile plant in the world. The oldest brother, John T. Woodside was most involved with Overbrook.

In 1913, the brothers purchased land on the eastern edge of Greenville from Asa A. Green for $7,500. In September of that year, the area was surveyed and subdivided by architect H.. Olin Jones. Just 2 years later a portion of the land was sold to R.J. Rowley, a farmer. Rowley was probably the developer of the first section of Overbrook. This area is dominated by Craftman Bungalow homes which were popular during that era. Rowley sold land to the Workman and Leigh real estate firm which sold to individual purchasers. Homeowners where predominately white collar professionals.

R.E. Dalton surveyed another portion of Overbrook in 1917 and by 1922 Overbrook Circle had been subdivided. By 1924 the neighborhood was fully developed. This area was developed by Franklin Smith for "well-off" businessmen and professionals and, therefore, both lots and homes were larger.

The neighborhood of Overbrook was one of the first suburbs of Greenville, and attracted many people with its easy access by trolley. The popularity of the "Toonerville Trolley," as it was called, continued despite the switch to bus transportation around 1928.